Dakota Johnson may be best known for her role as Anastasia Steele in the Fifty Shades Of Grey movies, but when you meet her in person, it is her quick, dry wit that leaves the biggest lasting impression.

“This is my house,” the actress said on Wednesday evening. “This is where I live. I got fresh flowers for you.” It was not her home, but rather a very cozy dressing room, stocked with Champagne and, yes, fresh flowers, where Johnson situated as she celebrated Italian lingerie brand Intimissimi’s Fifth Avenue flagship opening.

While her fellow brand spokesperson Irina Shayk showed off some of the brand’s lingerie in a plunging, bra-exposing silk top, Johnson opted for a more demure silver dress from The Vampire’s Wife as she talked about her first memories of the brand. “I work a lot in Europe and in Italy, specifically, and when I’m there I’m there for months at a time, so I’ll go into an Intimissimi,” she said. “I think it is the perfect thing to come to America. There has not been a lingerie brand in the United States whose elegance and class can reach a certain woman, but also the price point can be accessible to every woman. That is something that I think every woman deserves and wants. Their lingerie is comfortable and beautiful and made well.” 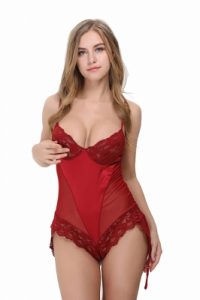 When it comes to her own underwear, Johnson said she looks for both comfort and beautiful design in a piece—or as she succinctly summed it up, “I won’t buy it if it sucks.” As for the type of style she doesn’t like? “I’m not a big push-up bra girl. Obviously I want things to look nice, but I don’t really care about that. I would rather feel comfortable and know that things are pretty than have my tits in my chin.”

Luckily, there were plenty of non-push-up options at the brand’s new two-story location. “I think you can feel really bad about yourself if you order lingerie online, which is something that I’ve done before and sucks because you’ll never get it right,” Johnson said of her preference for buying lingerie in person. “It is nice when you can go into a store and things are pretty and there is a nice velvet chair that you can sit on and there are women who are educated about female bodies that can help you find the right thing. It is something that is old-fashioned and very specific to your classic woman.”

Previous PostWear the right lingerie, jacket can not cover your good body!
Next PostA History of Underwear as Outerwear mdash;Corsets, Cone Bras, Nipple Pasties and More